The psychiatrists have all been clear. I need peace, serenity and room to let my thoughts unspool. But what do they know, eh? Four kids, a dog, a newborn baby and a publishing deal makes for a far more interesting life… 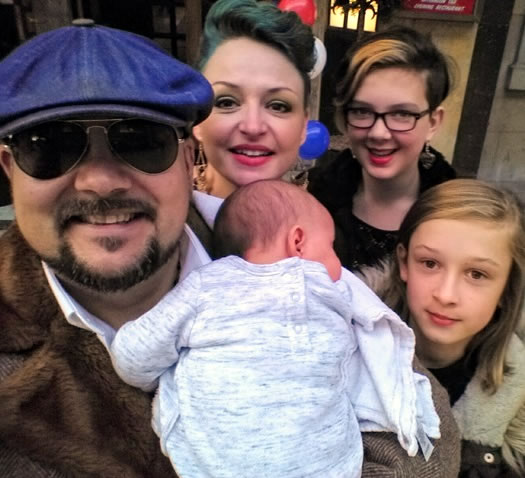 I woke this morning to the news that a large nail was sticking out of the headboard of our bed. According to wife 3, it was only a matter of time until child 5 rolled over and kebabbed herself. Did I want that? A baby with an eyepatch? Did I?

This news was broken simultaneously with some other choice snippets. Child 3 had put 18 sweeteners in my tea, dog 1 had eaten a nappy and was having an asthma attack, child 4 had managed to tangle her left pigtail into the cardboard star she had spent the previous evening spray-painting gold in a poorly ventilated room (producing a night of dreams involving a giant hedgehog, a wheel of cheese and a tin of pineapple chunks), and by the way, did I have some cash to put in the charity tin at school…

Children 1 and 2 were mysteriously absent from the dawn gathering in Mum and Dad’s bedroom – a situation that is considerably more unnerving than their actual presence. Child one is 15, and male, which means that our relationship has been reduced to me asking where all the cereal has gone, followed by him mooching down from his room carrying half a dozen bowls – hardened Shreddies stuck to the side like mosaic tiles.

Child 2? Ah well, child two has done well this week. She won a writing competition at school and when she was given the chance to pick her own prize, she opted to go for a three course meal with ‘Just Daddy’.

This is at once thrilling and unsettling. She’s 13 and I fear she is priming me from some big announcement. I can see it now, midway between the dessert and the cheese course, glibly alerting me to the fact that she’s been expelled from school for stirring pencil shavings into the Angel Delight (and this is based on experience) using a cheese slice as a bookmark in the school library.

I’m not moaning, I hasten to add. I’ve discovered in the few weeks since baby came along that my gender precludes me from indicating that I may be tired, stressed, overworked or run ragged. I’ve learned this the hard way. I’ll be in the queue for a takeaway coffee, phone between chin and shoulder, explaining to school that child 3 was joking when she said that she’d had Vienetta for breakfast, holding a squawking baby in one hand, and generally looking like a waxwork left too close to an electric fire. I’ll have cereal in my beard, eyes like blue brie and there will be so many baby-spew stains on my jacket that it would pass for some kind of haute couture camouflage garment. I won’t be moaning, but somebody will ask me, unbidden, how things are going. “Great, great,” I’ll say. “Bit knackered but I’m getting there…,”

“You’re tired! Ha! What about Mum? She’s the one that does the hard work. You on babysitting duty, are you? Does she need a break? Bet you can’t wait to hand her back. Honestly, my husband didn’t so much as change a nappy. Men, honestly, you’re good at pontificating but if you want something done, you have to ask a woman to do it. Bet you thought it would be easy, didn’t you? Oh, I don’t envy you. All those sleepless nights. Bet your poor wife is exhausted, isn’t she? Is she sleeping through? Our youngest didn’t sleep more than 15 minutes between birth and the age of 17. Would only eat runner beans and Mars bars. At one point I was so tired that my hips dislocated themselves in protest. I just got on with it. Couple of Paracetamol and I was right as rain. Then my fella would come in and ask why the roast potatoes weren’t cut at a right angle. Honestly, men…,”

I’m not quite sure what the correct response is. I’m tempted to point out that the last time I found an uninterrupted hour to write a book (the novels that actually pay the bills), I was sitting outside a broken toilet cubicle on a train to London, having my feet run over by the snack trolley and wondering why, at nearly a hundred quid for a return to London, I had presumed that I would be entitled to a seat.

But I’m not moaning. I’m just saying. I’m a bit sensitive about this, you see. I’m determined not to be one of those dads who thinks they’ve helped around the house when they’ve closed the cutlery drawer. I do school runs and homework and answer difficult questions like ‘do you know what happened to my shoe after we finished using it as a boat?’. The only thing I don’t do is breastfeed and by goodness I’ve given that a go. There’s no feeling quite like looking down into the adoring eyes of your newborn daughter and having to say ‘leave it, you’re embarrassing yourself’ a she roots for my nipple through a thick covering of chest hair. 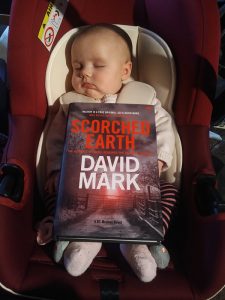 At this exact moment, I’m sitting in the kitchen, typing with one hand while rocking the baby in the child seat on the kitchen table with the other. At some point I have to go and focus intently on some editing required asap by my American publisher. I’m halfway through writing a book which is due with my UK publisher in four weeks and I have half a dozen different blogs and interviews to get out of the way before I begin the serious business of helping child 2 with her drama monologue. Then there’s the nail to be hammered back in, using my patented technique of putting a hardback book over the head and punching it, hard. Then I have to pick up child 4 from school, where she is dressed as a star, having been given the opportunity to dress as ‘something from space’.

I’m not moaning. No. Not at all. But in the event that you hear of me going insane in a Starbucks and force-feeding a stale pain-au-chocolate to some well-intentioned grandmother, don’t judge too harshly.