You’ve got me feeling nostalgic. Until a few weeks ago, I had an office of my own. Green walls. Burgundy leather recliner. My horses looking up at me from the stables and snowdrops sprouting among the headstones in the graveyard next door. Books by the cartload and a cork-board covered in random newspaper articles, interspersed with photos of my daughter that I took when she cut all her air off on a whim and was trying to grow it back through intense cranial straining.

I moved house a month before Christmas. Downsizing, that’s the word. I don’t have an office any more. I have a corner of my bedroom, next to the laundry basket. I have a nice old writing desk with an angled reading lamp and the same burgundy recliner as before, but it doesn’t really fit and is just something to trip over on my 2am trips to the lavatory. I bashed the wheels off with a hammer in the hope it would fit under the desk, which apparently was very childish and the result of temper rather than strategic thinking.

The new ‘creative space’ is a work in progress. Much of my life would fit this category. I have a windowsill covered in the kind of books that tend to be shown in the background of programmes like True Detective. They’re bookended with skulls. The kids know better than to open the textbooks. Amber still hasn’t got over seeing the crime scene photographs in Practical Homicide Investigation.

The desk is a little lacking in feng shui. I’ve got an illustrated book of Russian prison tattoos sandwiched between a list of British executions from the turn of the last century, and a box of marzipan fruits that somebody may have sent me, or which may have popped into existence of their own accord. 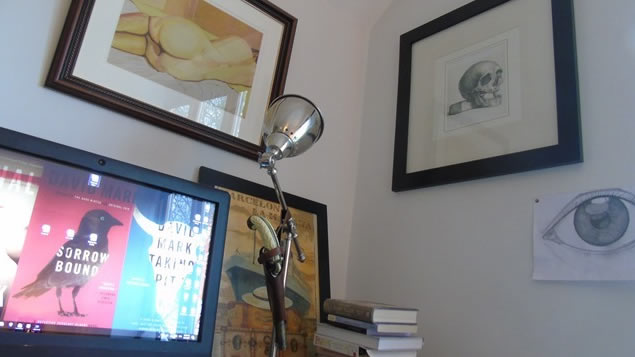 There’s a picture of a skull on the wall to my right. I like skulls. I bought it in Edinburgh years ago and haven’t smashed it yet, so it must be lucky. I’ve also got a print of an old steamship. I don’t know why. I bought it in rural Spain six years ago while holidaying in a converted cave. It didn’t fit in the suitcase or the hand luggage and the fact that it’s here at all is testament to the fact that I refuse to be beaten by inanimate objects. There’s also a pencil sketch of an eye. It makes me think of birds and woodland.

My mugs of tea tend to end up on the personalised beermat, which was produced by my UK publishers for some campaign or another. A short story I wrote as a promotional tool for the same campaign has been dumped on my desk by a passing child, along with a roller for getting the fluff off clothes. I have no answers to give you. 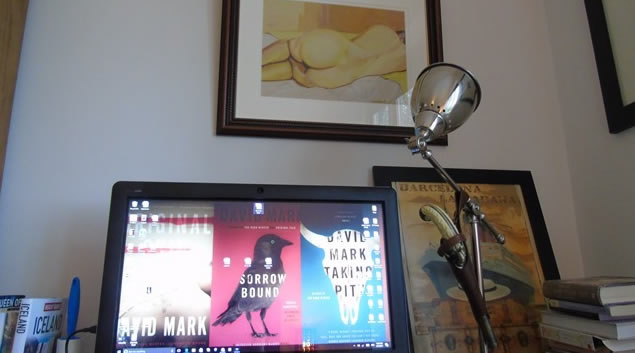 There’s a nude on the wall in front of me. Sensual. Delicate. Vulnerable and raw. It’s by my favourite artist, who also happens to be my fiancée. In times of creative frustration, it’s nice to look up and see a friendly pair of buttocks.

Check out my replica pistol, complete with holster. I wore it at a pirate party and I still have the tricorn hat. The children threw away the eyepatch when I kept making the same joke about Apple bringing out a monocular gadget called an i-Patch. 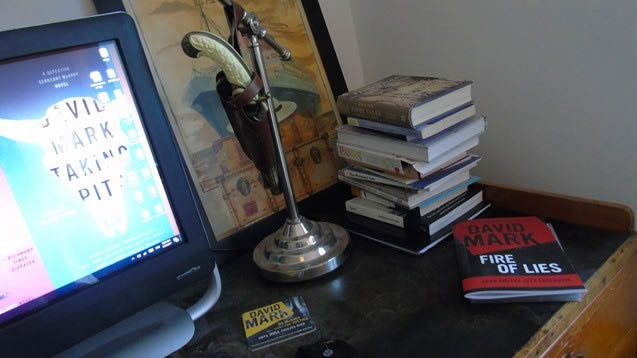 I have a box of wrestling figures under the desk. They’re not toys, no matter what anybody says. They’re a collection, and there is nothing wrong with a 39-year-old man spending his money on them if he wants to. There’s a Jack Russell terrier somewhere nearby as well. She’s called Mol and she’s old, chronically grumpy and mildly incontinent. We’re kindred spirits. 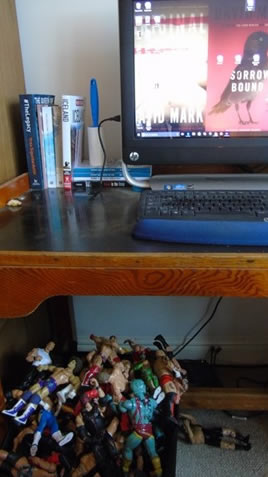 There’s a fairy door next to the skull. I’d like to say that it has some rich symbolism but in truth, I don’t remember putting it there. If I ever wake up and find it open, expect a bemused Tweet.

It’s the view from the window that keeps me sane. Charcoal trees against a blue-black sky; grey clouds piled up like mountains. I can see myself in the darkened glass, which is the main reason I bother getting dressed.

I can hear children at the door. There are four of them but it feels like more. They’re very good at whispering at the top of their voices so as not to disturb me. They have their own rooms but they prefer to play on the landing at the top of the stairs. I don’t know what game they’re playing but one of them is shouting ‘stop it, stop it’ and insisting that I’ve given a permission for something I don’t remember being asked about. The one I’m biologically responsible for just brought me a clay model of a flower. It will go on my desk, next to the empty whisky decanter, which has looked at me with cold fury since I embraced sobriety. I gave it up to save a bit of money, because the kids need food and clothes and a new Xbox. An extraordinary amount of food, it turns out. Best go feed them. Thank them properly for helping me find this tranquil corner of the house where I can write the books that pay for the rest of it. Ow! Banged my knee on this stupid chair!