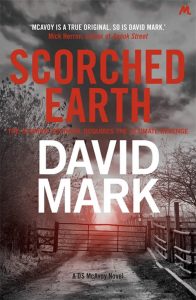 A murder and a missing person case puts McAvoy on the track of a man whose desire for revenge is unstoppable – but who may not be the worst criminal involved.

The trainee detective assigned to the case isn’t so sure.

McAvoy thinks someone was being held at the derelict building where they just found a body pinned to the wall…and that all the signs point to it being a little girl.

But why would anyone not report a kidnapping?

And how far would someone go to get revenge?

The case will test McAvoy to breaking point – as the crimes of the present lead him to a final violent confrontation with an enemy from his own past.

‘skilful … riveting … what remains baffling is why no production company has yet snapped up Mark’s work; he paints pictures with words that should be a joy to any director…’
SARAH MORGAN, ON: YORKSHIRE

Paperback of Scorched Earth is due out 6th September 2018.