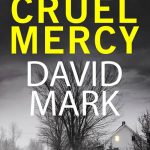 Two men are taken into the woods. Forced to dig their own graves. But one of them survives the gunshot…

Back home, Val’s being held responsible for the blood spilt in the snowy woods of upstate New York. If McAvoy doesn’t find out the truth, all hell will break loose, putting his own family in the crossfire.

Investigating proves harder than he could have imagined. New York City is a different world, with different rules. Soon, he finds himself up against squabbling cops, mafias old and new, and the culmination of a crime forty years in the making.

All McAvoy can do is the right thing. Even if it kills him…

‘To call Mark’s novels police procedurals is like calling the Mona Lisa a pretty painting. Beautifully crafted, filled with flashbacks, horror, angst, and chilling detail, this one is his most complex and best yet.’
KIRKUS STARRED REVIEW

US edition of Cruel Mercy
Buy it from PENGUIN RANDOM HOUSE