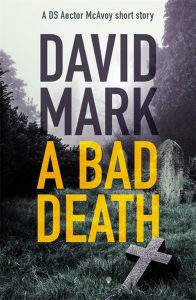 Will Blaylock died while on day release from prison.

It was a bad death. But accidents will happen.

Detective Sergeant McAvoy isn’t convinced, though. And he owes a debt to Will’s cellmate Owen Swainson: a debt formed in blood and fear when they came together to catch a killer.

But their search for a murderer will rip open old wounds, and force old enemies out of hiding…

A Bad Death
Also of Interest